YourSay What we Heard Report 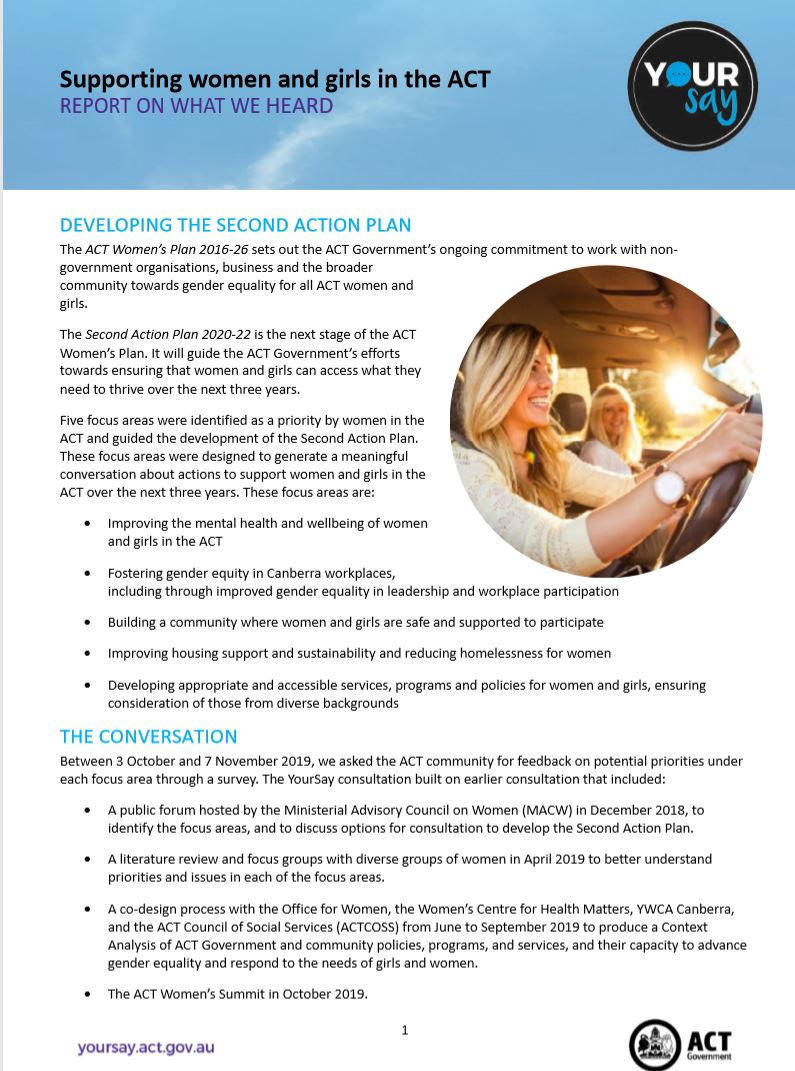 From 3 October and 7 November 2019, the Office for Women made a survey available through YourSay

to better understand what the ACT community believed was most important to ensure women and girls can access that they need to thrive, to inform the development of the Second Action Plan. We have carefully considered all of your feedback, which helped us to draft and target actions in the Second Action Plan, and also identify areas for future work within the Office for Women.

The What We Heard Report reflects the feedback that we received through the YourSay survey. 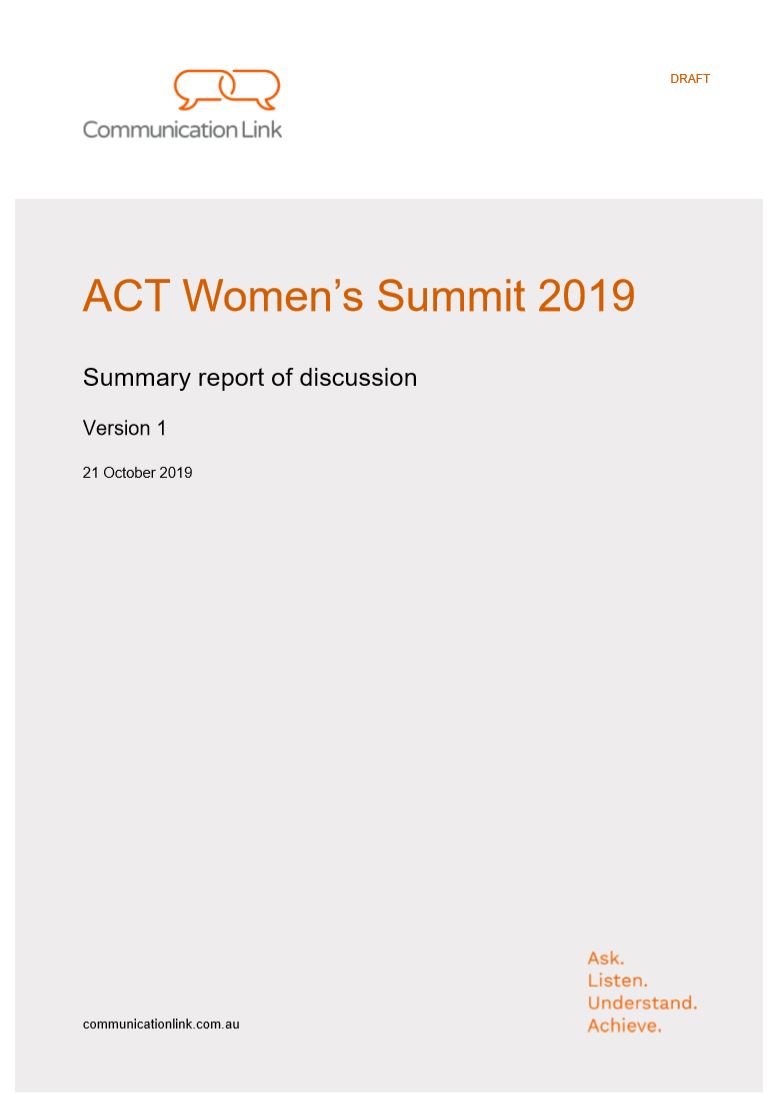 Over 165 people attended the ACT Women’s Summit, which was a full day, facilitated event on 14 October 2019. The Summit Report details all the actions proposed by Summit attendees for inclusion in the Second Action Plan (SAP) under the ACT Women’s Plan 2016-26. The ACT Women’s Summit Discussion Paper sets out information about the focus areas [insert] for the Second Action Plan[end insert] and what these could mean for women and girls in the ACT. The discussion paper also includes information on what is already in place for women and girls in the ACT, what the data and community has told us already, and where we may want to be in the future.

The Office for Women worked alongside the Women’s Centre for Health Matters, YWCA Canberra and ACTCOSS to co-design a Context Analysis of the services available to support women and girls in the ACT, in late 2019. This paper summarises the information and feedback from the Context Analysis that informed and led to the development of the ACT Women’s Summit Discussion paper.

Research on Women in the ACT 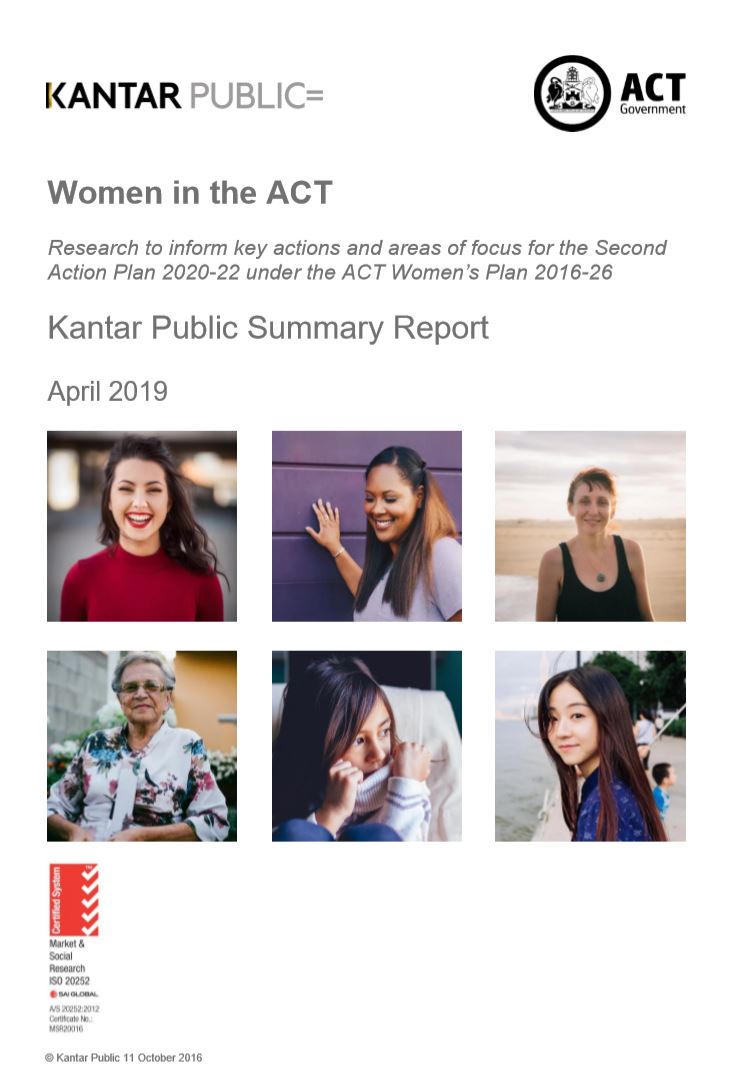 The Office for Women and the Ministerial Advisory Council on Women engaged consulting firm Kantar Public to undertake two consultation activities in April 2019 to inform the development of the Second Action Plan. This paper sets out the findings of:

Five focus groups with a total of 25 women in the ACT to explore their needs and concerns relating to each focus area under the Second Action Plan. Participants included women with disabilities, culturally diverse backgrounds, diverse ages and professional working status.

A literature review of existing programs and initiatives in place for women and girls in Canberra under the five focus areas, as well best practice in place elsewhere in Australia and overseas.

This Gender Impact Analysis tool has been developed to support ACT Public Service employees to undertake better analysis of the impact that their programs and services will have on men, women and gender diverse individuals in the ACT. It also provides a template for preparing a Gender Impact Statement where this is required. This tool may also be of use to the broader ACT business and community sectors.

Women's Safety Audit resources include a checklist, survey questions and information about why, when and how to conduct a Women’s Safety Audit