2020 - ACT Senior Australian of the Year 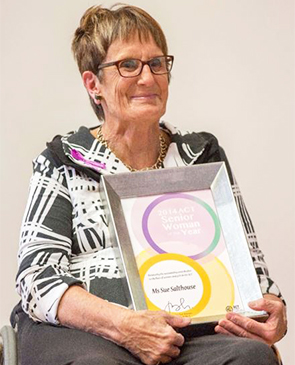 Sue Salthouse was awarded the 2020 ACT Senior Australian of the Year. She has previously been inducted to the ACT Women’s Honour Roll in 2014 and 2015.

Sue Salthouse has worked in the area of social justice and human rights since 1996. She is particularly concerned about how the intersecting issues of gender and disability discrimination affect women with disability. Sue is Chair of Women with Disabilities ACT, a systemic advocacy organisation which bases activities on principles delineated in the Human Rights conventions ratified by Australia.

Sue is a Director of Women in Adult and Vocational Education (WAVE) and Rights & Inclusion Australia and a past-chair of Advance Personnel (Disability Employment Service). In 2015-16 she was the ACT representative on the COAG Advisory Panel on reducing violence against women and their children. She is a member of the governing Council of the University of Canberra and immediate past Chair of the ACT Disability Reference Group.