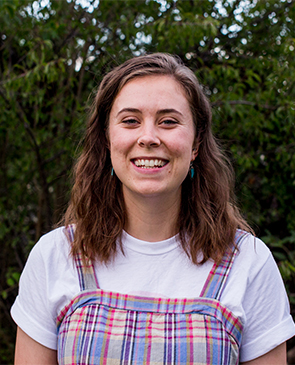 Madeline Diamond was awarded the 2020 ACT Young Australian of the Year.

Madeline is the founder of Trash Gather (previously known as Trash Mob), a youth-led community group that meets every month to pick up rubbish in public areas in Canberra – as well as advocating for waste free solutions.

Under Madeline's leadership, young people are working together to take control of the future they would like to see. A 100% volunteer-powered organisation, Trash Gather has established sister groups in Yass and Canberra, and is working to establish groups in other towns and cities.

Madeline is also the Executive Officer of SEE-Change, a community organisation encouraging Canberrans to live more sustainably, and supporting grassroots environmental action around the ACT. Her role is to engage young people and provide greater opportunities for them in the sustainability space.

Her achievements include initiating the Young Changemakers Workshop and overseeing the annual Parliament of Youth on Sustainability event. She also recently received an ACT Government Community Zero Emissions Grant, to host a film festival and competition on the theme of sustainability