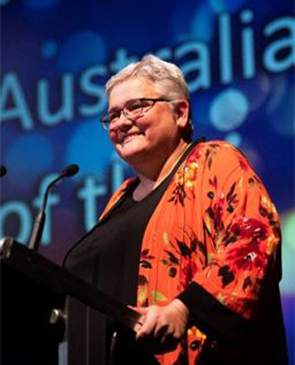 Katrina Fanning was awarded the 2020 ACT Australian of the Year.

Katrina Fanning is a Wiradjuri woman and current Chair of the ACT Aboriginal and Torres Strait Islander Elected Body.

Following a successful rugby league career where Katrina played 26 Test matches for Australia across her 14-year career, including in the Jillaroos, Katrina continues to champion inclusion in sport as Chair of the Australian Rugby League Indigenous Council and a Director for the Raiders.

Katrina has a wealth of management experience, having worked in senior roles with Centrelink, Aboriginal Hostels, and the Department of Education, Employment and Workplace Relations, as well as holding positions on various committees and boards. She is also Director of Coolamon Advisors, an Indigenous majority-owned and managed consultancy.

She has a string of accolades to her name, recognising her extensive and diverse contributions across the community. She has previously been awarded a Public Service Medal, the ACT Woman of the Year Award and was first inducted to the ACT Women’s Honour Roll in 2014.