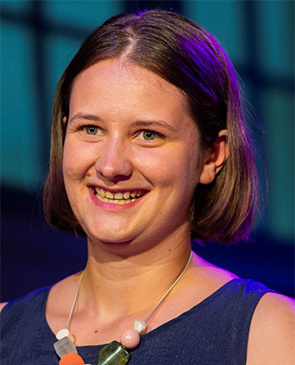 Morgan Marshall was awarded the 2019 ACT Young Woman of the Year.

Morgan Marshall has inspired a new generation of women to pursue STEM subjects and careers through her tireless work with Robogals Canberra. Robogals is part of an international student-run organisation that aims to inspire and empower young women to consider studying engineering and other related ﬁelds. Each year Robogals teaches more than 1000 girls about robotics, digital literacy and computational thinking.

Morgan has served as president of Robogals Canberra, and her outstanding work as a role model for young women in STEM was acknowledged when she received the Legends of Robogals Award. Under her leadership, Robogals also won Chapter of the Year and Best Initiative Awards. Morgan was also named the runner-up Young Canberra Citizen of the Year in 2018.

Morgan’s contribution is not limited to Canberra thanks to her work as regional mentor to Robogals’ Asia-Paciﬁc chapters. This role was created after Morgan observed that chapters in this region were not receiving the same level of support as chapters in Australia due to cultural diﬀerences.