Ministerial Advisory Council for Veterans and their Families

It provides advice to ACT Government on policies and initiatives which help to support better outcomes for the city’s veteran community. An estimated 26,000 veterans live in the ACT.

If you have a query about the Council, or would like to bring an issue to the Council’s attention, please contact the secretariat on (02) 6205 3883 or email communityparticipation@act.gov.au 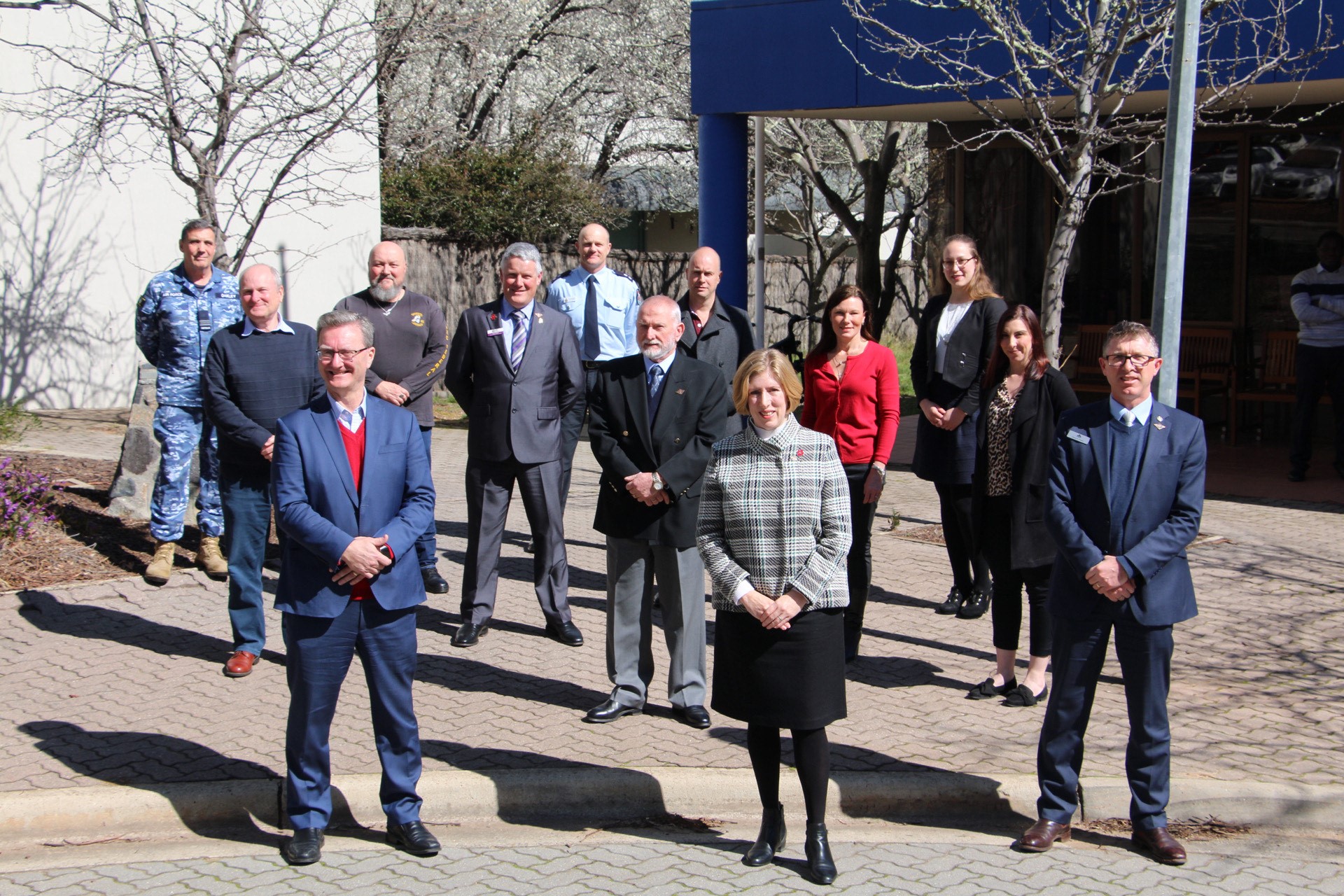 Six new members have been welcomed into the ACT Government’s Ministerial Advisory Council for Veterans and their Families.

Under the continuing leadership of the Chair, Brigadier Alison Creagh CSC (Ret’d) and Deputy Chair, Mr Gerard Pratt, the new Council’s inaugural meeting was held at the Australian War Memorial on 5 December 2019.

ACT Minister for Seniors and Veterans Mr Gordon Ramsay MLA is pictured with members of the Council during the meeting.

Brigadier Alison Creagh was appointed to Chair the ACT Ministerial Advisory Council for Veterans and their Families in November 2019 and previously chaired the ACT Veterans' Advisory Council from September 2017 to November 2019. She is a Non-Executive Director of The Hospital Research Foundation, The Road Home and Veterans Film Festival. Alison chairs the Board of Governors for The Road Home and is a trustee of the Commando Welfare Trust and is President of Rowing ACT. Brigadier Creagh is a member of the ACT Defence Industry Advisory Board and the AustCyber Canberra Node Industry Advisory Group and is a strategic adviser for several organisations. She was previously a Member of the Australian War Memorial Council and Vice Chair of the Australian Peacekeeping Memorial Project. Brigadier Creagh retired from the Australian Regular Army in March 2015 after a 30-year career and continues to serve in the Army Reserve. She is the Representative Colonel Commandant for the Royal Australian Corps of Signals. Brigadier Creagh served on operations in Cambodia East Timor, Iraq and Afghanistan and is passionate about supporting and representing the interests of the veteran community.

Mr Gerard Pratt commenced at the Australian War Memorial in November 2005 and is the current Manager for Visitor Services, a position he has occupied since 2014. Prior to joining the Memorial he served in the Royal Australian Navy for almost 17 years with numerous overseas deployments, including operational service in East Timor, Iraq and on Border Protection. Gerard has played an active role in the veteran community within the ACT serving in an executive capacity at either a sub-branch or state branch level of the Returned and Services League of Australia since 2004. Through his work and voluntary roles, Gerard continues to engage with veterans of all ages, but also their families to better understand the issues of importance to them. He was first appointed to the Veterans’ Advisory Council in April 2017 to fill a casual membership vacancy and was subsequently reappointed in October 2017 to the role of Deputy Chair. Gerard was reappointed for a final term in November 2019 to the renamed Ministerial Advisory Council for Veterans and their Families, again to the role of Deputy Chair.

Flying Officer Shaun McGill is currently serving in the Royal Australian Air Force, joining in 1991. He has undertaken a variety of positions throughout his career and is currently working in the Directorate of Personnel Policy – Air Force. He has been an active member in the ex-service community by seeking to promote the needs of current and former members of the Australian Defence Force and engaging with ESOs to help improve the delivery of services provided to veterans. He has also undertaken many roles to raise awareness of mental health in the veteran community. Flying Officer McGill is married with two school-age girls. He has first-hand experience of the challenges faced by Defence families. He is currently RSL Gungahlin sub-Branch President.

Mr Dave Munro is a former soldier from the Royal Australian Corps of Signals who deployed to Rifle Company Butterworth, Malaysia in 1982 with 8/9th Battalion Royal Australian Regiment. After leaving the military Mr Munro continued in communications working as a Flight Service Officer with the then Civil Aviation Authority. Mr Munro still works for the same company, now Airservices Australia, as a Line Manager in the Network Coordination Centre in Civic. Married to a former soldier, Mr Munro and his wife have raised six children, two of whom served in the Army with one completing two tours of Afghanistan. Mr Munro continues his involvement with the veteran community as Vice-President of the Gungahlin Sub-Branch of the RSL and as a member of the Veterans Motorcycle Club, Federal Chapter.

Squadron Leader Gary Oakley was born in Katoomba NSW his people are the Gundungurra. He was the first Indigenous Liaison Officer employed at the Australian War Memorial and also worked as a curator in the Exhibitions section and curated most of the major gallery refurbishments in the last 20 years. He is the National President of the Aboriginal and Torres Strait Islander Veterans and Services Association of Australia (ATSIVSAA). His connection with the military started as a member of the cadet corps at high school, he joined the Royal Australian Navy as a Junior Recruit in 1969 and after twelve months at HMAS Leeuwin served in ships such as HMAS Duchess, HMAS Sydney (Vietnam service), HMAS Perth, HMAS Stewart, HMAS Stalwart and the submarines HMAS Oxley and Ovens. While at HMAS Platypus he became curator of the 1st Australian Submarine Squadron Museum, and on leaving the RAN, took up a curatorial position at the Australian War Memorial in the 1991. He has been a curator at the Bavarian Army Museum in Ingolstadt, Germany, and studied Cultural Heritage Management and Museum Studies at the University of Canberra. As a member of the Navy Reserve for 20 years worked closely with the Navy History section, documenting and researching naval history also assists with Indigenous Affairs–ADF helping with their Indigenous Pre-Recruitment courses as well as travelling to community to speak to Indigenous youth in relation to careers in the Defence Force. He transferred late 2014 to the Air Force as a Squadron Leader working within Air Forces Indigenous Affairs branch as the Air forces Indigenous Historical Custodian.

Mr Rob Thompson served in the Royal Australian Navy from 1993 to 2002 as Petty Officer Physical Training Instructor and continues his service in the Active Reserves. Mr Thompson is a third-generation sailor with a proud family history of serving in the Australian Defence Force. Mr Thompson regularly volunteers to assist veterans and first responders through the provision of welfare support as a Service Ambassador for organisations such as Soldier On. In addition, Mr Thompson has also developed and delivered a number of wellbeing initiatives for veterans and First Responders including wellness and social connection initiatives and physical activity involvement such as cycling, yoga and walking. Mr Thompson is a public sector management professional and career firefighter. His current role is Station Officer with the ACT Fire and Rescue.

Dr Mark Lax OAM, CSM is a veteran who served 33 years in the permanent Royal Australian Air Force, retiring at the rank of Air Commodore in 2007. He continues with the RAAF Reserve. Dr Lax has been Legatee with Canberra Legacy since 2007 and is currently serving as its President. In addition, Dr Lax is a member of the RAAF Association of the ACT, the United Services Institute of the ACT and the Defence Force Welfare Association, ACT Branch. In 2011, Dr Lax was awarded an OAM for service to the community through research, documentation and recording of Australia’s military history. In his role as President of Canberra Legacy, Dr Lax is driven to represent the needs and aspirations of veterans’ families, especially given the organisation currently assists around 870 widows, 40 dependent children and 16 adults with a disability in the ACT.

Mrs Emma Steil is a National Delegate for Defence Families of Australia, representing the ACT and Southern NSW. Mrs Steil is a committed advocate for defence families. Having consistent contact with defence families enables Mrs Steil to acquire information in order to better understand their needs regarding any ongoing and emerging concerns. Mrs Steil also regularly meets with defence stakeholders including local commands, Defence Community Organisation, Defence Housing Australia, ex-service organisations and major defence contractors. Defence families liaise with Mrs Steil to provide feedback on issues, areas of concern or for advocacy. While Mrs Steil brings a wealth of experience working with defence families in a professional capacity, she also brings a personal perspective to the Council as the spouse of a current serving full-time member of the Royal Australian Navy with two school aged children.

Commander Ward Gainey (Ret’d) is President of the Vietnam Veterans Federation – Veterans Support Centre at Page and has served at the centre for the past five years. While the centre is primarily focused on Vietnam veterans, increasingly veterans from across the span are accessing services and activities. Mr Gainey was a member of the Royal Australian Navy for 29 years and worked as a Defence consultant for 20 years. Through his extensive naval and Defence career and service at the centre, Mr Gainey has significant understanding of the service personnel and the challenges faced when transitioning from Defence to civilian life.