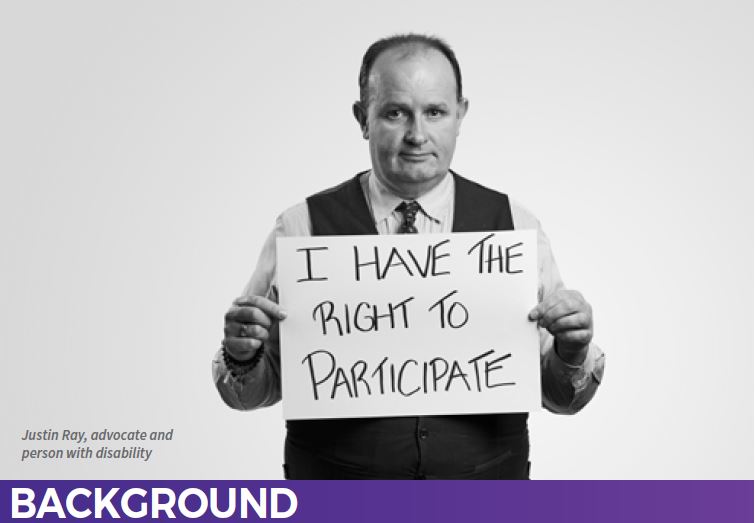 The ACT’s Disability Justice Strategy is set against the background of a large and significant body of work that promotes the need to develop policies and approaches that address the serious and multiple disadvantages faced by people with disability in accessing justice.

Australia ratified the United Nations Convention on the Rights of Persons with Disabilities (CRPD) in 2008. The purpose of the CRPD is to ‘promote, protect and ensure the full and equal enjoyment of all human rights and fundamental freedoms by all persons with disabilities, and to promote respect for their inherent dignity’.

The CRPD requires the signatory states to ‘ensure access to justice for persons with disabilities on an equal basis with others…’ (Article 13.1). It also requires the promotion of ‘appropriate training for those working in the field of administration of justice, including police and prison staff’ (Article 13.2).

A series of reports, research projects and community consultation processes at national level have recommended that all states and territories develop disability justice strategies to drive reform and cultural change to address the barriers to accessing justice for people with disability. Of note are Equal Before the Law — Toward Disability Justice Strategies 2014, Australian Human Rights Commission, The Justice Report released by the Law Council of Australia in 2018 and I Needed Help, Instead I was Punished: Abuse and Neglect of Prisoners with Disabilities in Australia, Human Rights Watch 2018.

The National Disability Strategy 2010–2020 (NDS), developed by the Council of Australian Governments and endorsed by the Commonwealth and all state and territory governments, sets out a ten-year national plan for improving life for Australians with disability, their families and carers. One of the six policy areas of the NDS is ‘rights protection, justice and legislation’ which includes seeking to improve responses to people with disability in the justice system.

Royal Commission into Violence, Abuse, Neglect and Exploitation of People with Disability

The ACT Human Rights Act 2004 (HRA) states that ‘Everyone is equal before the law and is entitled to the protection of the law without discrimination. Everyone has the right to equal and effective protection against discrimination on any ground’ (Section 8 (3)). The example contained in the HRA includes discrimination because of disability.

The development of a Disability Justice Strategy is an election commitment by the ACT Government and reflects that:

Equity and inclusion are the cornerstones of the ACT Government and reflect the values of Canberrans. Canberra: A statement of ambition

The ACT Government’s commitment to inclusion recognises that people with disability have a great deal to offer the Canberra community and that an inclusive society is a vibrant, diverse and stronger community.

The Disability Justice Strategy has significant cross-overs with other initiatives across the ACT Government including: Early Support by Design; criminal justice reforms arising from the Royal Commission on Institutional Responses to Child Sexual Abuse; the Family Safety Hub; the Future of Education: An ACT Education Strategy for the Next Ten Years; the Early Childhood Strategy; the Charter of Rights for Victims of Crime; the Youth Justice Blueprint; Building Communities not Prisons; and the commitment to reduce recidivism by 25 per cent by 2025.